I've become so used to having seizures that they are just part of my average day now. I have three types of seizures Myoclonic Seizures - these are sudden involuntary jerks; sometimes they are just one-offs and other times they come in clusters. I am usually conscious when I have then and they usually affect the right side of my upper body, but sometime they will affect my whole body.
I also have Tonic-Clonic Seizure which are your stereotypical seizure - unconscious full-body convulsions.Often I will get a warning, called an aura, before a seizure which will give me time to get on the floor or somewhere else where I will be safe and comfortable. Other time, like yesterday morning I get little or no warning - yesterday I collapsed in the bathroom and have a nice bruise on my hip from it. Sometimes a seizure lasts a few minutes; other times they can go on for quite a while. Sometimes I go into what is called a 'Status Seizure' episode whereby I have repeated seizures and generally require a 999 call out and medication to bring me out of the seizure.
I also have Absence Seizures which just look like I'm day dreaming and only last a brief few seconds.

I have Absence and Myoclonic seizures on a daily basis. I've learnt to live with them though they can still be frustrating, like trying to make a cup of coffee and your arm jerks spilling coffee everywhere. I've learnt to adapt - I drink from lidded cups and have plastic crockery incase I drop it. I try to look at the humorous side of things but deep down it is exremely frustrating (just like I do with my subluxations and dislocated joints). And I have Tonic-Clonic seizures approximately every 3-5 days, though sometimes they can be a daily occurrence too if I'm having a bad week.

My seizures where put down as non-epileptic and part of a condition called Functional Neurological Disorder, but back in July when I met with a specialist neurologist he wasn't 100% convinced that my seizures where purely non-epileptic, so I'm waiting to have a Video Telemetry EEG test to rule out or rule in Epilepsy alongside the non-eplielptic seizures.

There are a few triggers for my seizures including: stress, tireless, pain and over sensory stimulation among other things including biological factors like low blood sugars, low blood pressure, having an infection etc.

The thinking behind non-epileptic seizures is that with FND the brain is unable to properly send and receive messages properly and when the brain gets overwhelmed, whether it be from pain, stress, tiredness or even low blood sugars the brain short-circuits and a seizure occurs. 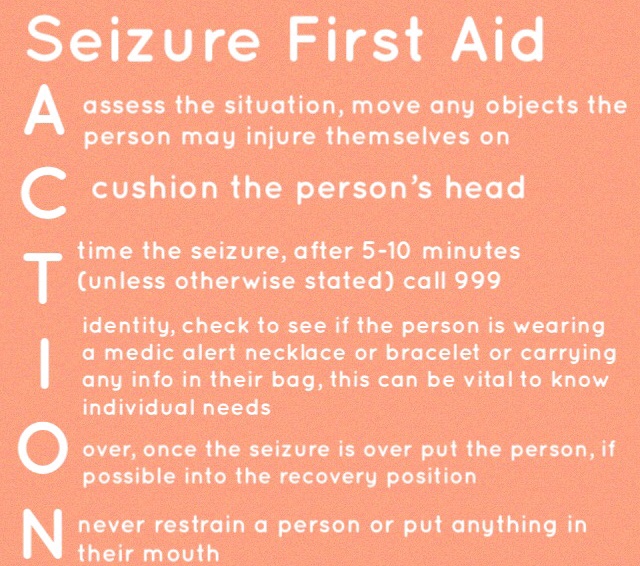 All of my illnesses go hand-in-hand. So when I have a seizure it puts a huge strain n my joints; sometimes causing them to sublux or dislocate which the pain from that does't help. It also causes Post Exertion Malaise and impacts on my M.E. too.

Sometimes I can recover quickly from my seizures; other times I need to sleep for a while other times after a bad seizure it can take days to fully recover. And when i'm having a bad spell of seizures, the pain and tireless from the previous seizure triggers another seizure and so on so I don't really get much recovery time.

My seizures impact so much on my daily living. Cooking is out of the question as I've had too many accidents. I use a hot water dispenser as a few years ago I had a seizure whilst holding a kettle of freshly boiled water and had 2nd degree burns. To wash I have to have my phone next to me and someone hovering around just in case. Drinking and eating is hard when your arm is constantly jerking. I also always get anxious going out the house as I hate having seizures in public. Even with the confusion I get post absence seizure has caused me injuries in the past. Then there's how the seizures affect me that affects my daily living, such as the tiredness following a seizure and the pain in my muscles and joints. I hate being alone in the house just in case something was to happen, my anxiety worsens whenever this fear becomes true and it takes me a while to settle back into feeling safe again.

Medication only does so much and still then my seizure are classed as frequent and uncontrolled.

I've lost count how many injuries I've had from my seizures - dislocated joints, broken wrists, burns and scalds, bumps and bruises, cracking my head open (more than once) and even a minor bleed on the brain (thankfully I didn't require surgery and it healed itself), cuts (such as from holding breakable objects in my hand and then having a seizure), falls down the stairs. I've even stopped breathing during seizures in the past.

Living with seizures never gets any easier. You just learn to adapt. You use gadgets and adaptations to make things safer; you shuffle up and down the stairs to avoid falls; you keep yourself on the sofa or in bed where you are safest etc. And that's all that can really be done; there is no magic wand, you just simply have to learn to live with it as difficult as that is.