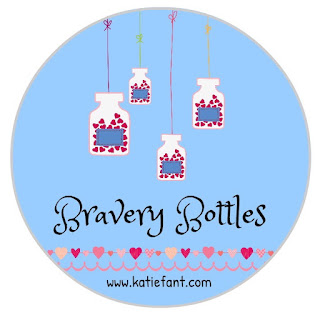 Set up by Katie Fant the 'Bravery Bottles' project is a new project for anyone with a chronic illness, regardless of whether its physical or emotional everyone is welcome to join. Bravery Bottles aims to highlight acts of bravery, such as a hospital stay, going to a therapy session, having a test/scan etc. It’s whatever you personally consider an ‘act of bravery’. Through the project our acts of bravery are recognised, rewarded and our fight made seen. Katie sees that ”anyone living with a chronic illness is brave”.


"How does ‘Bravery Bottles’ differ from other similar projects?

Put simply, the difference between my project and other similar well-known projects is based on the definition of ‘bravery’ within the chronically ill community, in particular who and what is considered as ‘brave’. The majority of other similar projects are aimed at those with an illness that, at times, means lengthy hospital admissions, the need to be blue-lighted to Resus in ambulances, require multiple ITU stays, need regular surgery etc. as their lives are at risk. Having to face ‘acute emergency’ type scenarios like this is, of course, very scary and no doubt deserves recognition and reward - and this project does just that. As well though, it extends to include the people who still have to face, manage and cope with a chronic illness as part of their daily life, but who don’t necessarily have the ‘acute emergencies’ as mentioned previously as part of their illness. Those who have a ‘stable’ illness, or one that doesn’t require emergency hospital admissions, either because of the nature of their illness, or because they have community care implemented to allow them to be cared for at home when they’re more unwell than usual, are often not considered ‘ill enough’ to take part in these sort of similar projects. Not only is this unfair to the patient, but it also encourages competition within the medical community as to who is the ‘most ill’." - www.braverybotles.com


Being part of the project and seeing my little glass bottle filled up bead-by-bead has greatly helped me recognise the resilience I have within myself to just keep going an fight whatever battles come my way and it's a visual reminder of how strong I am and how I got through some really difficult things or the everyday things that I have to endure like blood tests, seizures, dislocations etc.

I have given myself a bravery bead for acts such as:

How to project works:
Each person is given a 'Bravery Bottles kit' which include a tracking booklet, 30 bead and a glass jar charm and a charm bracelet. For each day of bravery a bead is added to the jar. Once your jar is filled with the 30 beads a milestone charm is awarded. There are also extra charms, such as introducing a friend to the project or when its your birthday.
It's a way of recognising and awarding ourself for the 'acts of bravery' we face as a life lived with a chronic illness. As well as this there is access to the participants Facebook group, monthly prize draws and other competitions that you can be a part of.