Back in December I had a Gastro Dietician appointment. We decided to put me on a Low FODMAP diet to try and help with my IBS and other gastro symptoms. Initially I went wheat and gluten free then in the new year I started to Low FODMAP diet properly and so far it's going well and the 80% success rate seems to be proving itself. Already my abdominal pain and stomach cramps are easing and my constipation is easing which is such a relief.

These are foods which are poorly absorbed in the gut and include simple and complex sugars which are found in a variety of fruits, vegetables, wheat and milk.

Currently I'm limited to what and gluten free foods, rice/oat milk, dairy free (though I have a diary allergy anyway) and a handful of suitable fruits and vegetables. Things like apples, pears, peaches are out. Some foods I can eat but only in small amounts for example I am limited with soya products (like I can only have 125g of soya yogurt a day or 60ml of soya milk) and I can only have 18g of garden peas or sweetcorn.

It's been a huge adjustment getting my head around it all but I'm getting there.

"Food is made from of many components, such as proteins, fats and carbohydrates (including sugars). Some carbohydrates (FODMAPs) do not get absorbed in the small intestine. They pass along the gut to the large intestine where there are billions of bacteria. The bacteria ferment FODMAPs which may result in gas production and symptoms such as wind and bloating. Diarrhoea and altered bowel habit can occur due to an osmotic effect which increases the amount of water in the large intestine making stops loose or liquid. Reducing the intake of FODMAPs has been shown to improve gut symptoms in most people with IBS-like symptoms." - Reducing Fermentable Carbohydrates the low FODMAP way

There are 3 stages to the low FODMAP diet:
- Reference: Kings College London


To anyone with IBS that's affecting their daily living I'd definatly recommend asking your GP to refer to you to see a dietician to trail a Low FODMAP diet.

Links:
FODMAPs - Kings College London this is a great site to better understand the Low FODMAP diet and there's a great animated video on there too.
IBS Network - FODMAPs 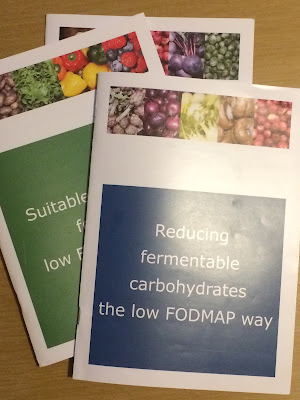