Living without a diagnosis 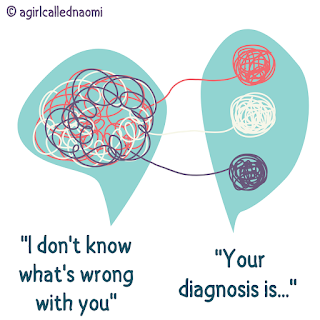 When I first started to become unwell in 2013 no one could tell me what was wrong with me; my symptoms where just 'medically unexplained'. At first I just thought things would be temporary. However as time went by my symptoms continued and worsened and as they did and I still received no answers I started to question myself. Names for illnesses floated around but nothing was certain and my symptoms remained 'medically unexplained'. It frustrated and upset me as what I was going through was real, especially the times when I wasn't believed or was told my symptoms where psychosomatic or 'all in my mind' which lead to receiving poor care from professionals.

Living without a diagnosis was so hard as when I went to the hospital or saw another professional like my GP or when I was asked what was wrong with me I had no answers to give. It was so difficult on many levels as what I was going through was real but it wasn't backed up by a diagnosis. Having no diagnosis to give also made it hard when I was applying for ESA and PIP - government benefits for when you're too unwell to work or to cover the extra costs incurred due to having a chronic illness/disability. Having no diagnosis also meant that I got little in the way of treatment for my symptoms. I would have a seizure but paramedics where reluctant to give me diazepam or my GP was hesitant to prescribe pain relief medication. Other aspects of my 'medically unexplained symptoms' where also met with lack of surety such as believing that my joints where actually dislocating or I was having the amount of migraines I was claiming to have. With regards to my high levels of fatigue my GP on a number of occasion did diagnose me with 'Post Viral Fatigue Syndrome' but I was told that I would soon recover, but I never did.

It wasn't until the July 4th in 2017 that I was told I had Functional Neurological Disorder and M.E (Myalgic Encephalopathy) by my neurologist Professor Mark Edwards. FND was one of the suspected diagnosis and looking into FND Professor Edwards is a predominately figure for FND and I begged my GP to refer me to him. Getting my first two diagnosis' was like a huge weight had been lifted and it confirmed that what I was medically going through was actually real. Finally I could stop blaming myself for what I was going through and the symptoms I was experiencing were real and not imagined or 'all in my head'. I had a name to give to people to explain why I was having this symptom or that symptom. Further to that my neurologist noted my hypermobility and referred me onto a rheumatologist and later I would be diagnosed with Hypermobility Spectrum Disorder/Ehlers-Danlos Syndrome (over the years professionals have used both HSD and hEDS but there is little difference between the two).

Looking at that particular diagnosis it took me back to my childhood and there I can now clearly see the signs of my EDS then. EDS is a hereditary connective tissue disorder; it was something I was born with but as often the case with EDS many people with the condition don't get their diagnosis until they are much older. I was born with a spinal curvature, hyperlordosis where my lower spine acutely curves inwards. I'm no stranger to back pain and joint pain due to my hyperlordosis but growing up my joint and related pain was always dismissed as 'growing pain' but now I can clearly see the signs of my EDS. I was a dancer and being hypermobile I used it to my advantage despite my pain. But again looking back my "growing pains" where dismissed as that and no one looked further into it.

I must say that many people are hypermobile to one degree or another and a lot of these people use it to their advantage, especially dancers, gymnasts and athletes. However the vast majority of those who do have hypermobility do not have EDS. Hopefully one day like the other forms of EDS a genetic marker will be found to help give people like me diagnosis, especially treating the condition early on such as when I was younger instead of leaving it until I was older and had developed many complications as a result of my EDS.

Coming to the present day I now have other diagnosis, often ones that come secondary to my 'main' illnesses, such as PoTS (Postural Orthostatic Tachycardia Syndrome).

Now I have a diagnosis (or a few as the case is now) means I can get the care I need as generally when you have a diagnosis you have NICE guidelines to tell professionals how to treat and care for me. I say generally as FND has yet to be given a formal NICE guideline but on a positive note last year the NICE guidelines for M.E where updated which was greatly welcomed by many. I've also found that now I have names to give to people like when I dislocate a joint I can explain that I have EDS or my non-epileptic seizures are because of my FND. Most of the time my symptoms are now understood, though I do find myself in situations where I'm not believed because my illnesses are not that well understood. On the whole though now I have my diagnosis' things are much better and though my health isn't great I'm getting the care and support I need compared to the time when my symptoms where 'medically unexplained'.