Payback is one of my key symptoms especially in regards to my M.E. With everything I do I have to pay for it to varying degrees. Sometimes the payback isn't too bad and I'll just need to rest and take it easy depending on what I've done. If I've done a 'big thing' (which to most people probably isn't a big thing) the payback will be more severe and will include me experiencing Post-Exertion Malaise (PEM) - a key symptom of M.E.

Some of my payback and PEM symptoms include a flare-up of symptoms including increased pain; fatigue; malaise (generally feeling unwell); my immune flaring up in which I experience severe flu/viral-like symptoms; reduced cognitive function; headaches/migraines, autonomic issues - the list goes on. Basically my body just has a massive tantrum because it's had to do something!

Experiencing payback is really difficult because I have to do things and even with most tasks having the support of my PA, Diane, I still get payback but having my PA does really help to make life much easier for me. Some of what Diane does helps to minimise at times the level of payback I experience. So for example getting a bath is something I have to do and it's very exhausting for me. I do what I can in the bath, mainly washing my face and brushing my teeth and the rest of everything that needs doing Diane does. - See my vlog with my PA where I share the different ways in which Diane supports and enables me.

People often jump to M.E being about "feeling tired" but often people miss what exacerbates a person's fatigue (as well as the severity of a person's fatigue as well as the many many other symptoms of M.E which people don't comprehend and just jump to "feeling tired"). Payback is what adds to the fatigue and other symptoms of M.E. Yes I do feel tired with little reason; I wake up feeling more tired than I went to bed! 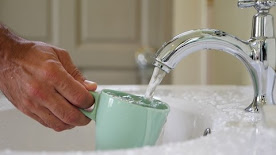 Payback is like a dripping tap. As your day goes on every little or big things you do has a drip drip effect and each drip (a) takes more of your precious limited energy and (b) fills up your little cup of fatigue. I say a little cup as it doesn't take much to overflow the cup to leave me utterly exhausted the point where that's me done for the day.

There are things that I find helps me to manage the payback (and other aspects of my M.E). Pacing and activity management play a huge part in helping me get through the day. I limit activities, depending on the activity to a set time period so I'm not doing an activity for longer than I can reasonably do. During the day I do a mixture of low-level activities (like laying and listening to a podcast episode) to more energy taking activities like crafting or letter writing. I also have set periodic rest periods for 30-60 minuets during the day to allow my body to pause. Resting doesn't recharge my energy levels and give me energy back but just stopping quite literally really helps me to just keep going until I can wind-down for bed.