Life with a disability - Getting the balance right in life & online

One topic that is being really talked about at the moment is the chronic illness community online sparked off by a recent BBC documentary.

When I first became ill I turned to the chronic illness community online; it gave me a place in which I could turn to, ask questions and receive advice especially as someone newly ill and learning to adapt to my new "normal". It also gave me to an extent a network of support from others who where chronically ill/disabled especially those who where around the same age as me.

Most of the groups I turned to where on Facebook as that was the main social media platform I was using at the time; I maybe also had Instagram to (though I don't think I did when I first became ill) and Facebook was the place for groups. I also started my blog in 2018 which as the time I entitled 'Diary of a Zebra' and it mainly focussed around my life with different illnesses and topics around disability as well as guest posts from others with chronic illnesses and disabilities and I avidly made use of different illness awareness days/weeks/months. I also documented through photographs my story of illness.

However as time when on I felt entrentched within the world of chronic illness and disability on top of dealing with my own ill health and for a time being ill was all I was and had going for me. It was who I was and it became my identity.

During my time in hospital in Leeds part of my care was some individual psychology sessions in which it gave me an opportunity to talk to someone who knew about my illness and dealing with people who where chronically ill. In those sessions I grieved for my old life and explored my life with my disabilities and the identity that came with that. My friend Ruth has this quote: "Your life is like a piece of cake and you have ten portions, but only one portion is your health." I began to realise who I really was and that I was more that the diagnosis' I'd been given.

I'd already dwindled away from Facebook but I decided to leave the groups I was in; I didn't realise how many I was part of and I saw how negative and unhelpful and in some ways how unsupportive these "support" groups where. It was around new year and I noticed in several groups one member had posted in several similar group the same post sharing the number of seizures he'd had that year. Other members where replying with how many seizures they'd had; it was almost like a completion for who'd had the most, the longest and the most serious seizures that year. How is it a 'support group' when people are in competition with each other? I now also see this on Instagram and somewhat on YouTube which is the main social media platforms I use these days. I see people determined to receive certain diagnosis or give "advice" to people that they may have a particular illness. In people's bio's its a game as to has the most letters abbreviating how many illness they have and who has the most letters. I see people post the most random videos and photos of their hospital appointments and stays, of surgeries and of medical devices and supplies. Some of these photos I get; its to help raise awareness and to let often young women with chronic illnesses/disabilities know they are not alone but sometimes I see a photo/video and I wonder why they are sharing such a post or how they can be well enough to do so. I have found some really good friends with chronic illnesses/disabilities though social media but I would say that these people do yes post about their health but it's in moderation and a healthy balance of health and non-health related content. 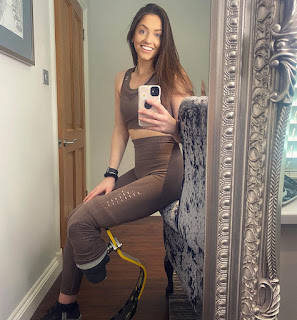 Back at the beginning of last year whilst I was in hospital I changed the name of my blog to encompass all ten portions of who I am and to try and move away from the focus of my blog just being about my health. I try to on both my blog here and my YouTube channel to balance out health and non-health related content as much as I can depending upon what I feel needs to be shared and talked about. I also now think a lot more about the photos I share on my Instagram account and most of the time now I don't avidly post (partly because my life is pretty boring and also there are better things to spend my limited amount of energy on). Yes I do post the odd health post [on my personal Instagram account]; generally for awareness but I'm more cautious with what I share and I'm more hesitant in sharing with something that is deeply personal aka my health. I generally only share to raise awareness such as recently for Severe M.E Awareness Day but even then I feel I'm more careful now with what I post on Instagram and YouTube.

Reflecting on how I post now compared to how I used to post about my health I feel I have a healthy balance. Yes my YouTube is more I'd say disability focussed but I do try to get plenty on non-health related videos shared and the same for my Instagram. I feel not over focussing on my health on social media has helped me in finding my identity and that healthy balance as away from social media my disabilities are my full-time job at present and emphasising that online I don't feel is necessary. Sometimes I do worry that because I don't post about my health that much that people don't realise or don't know/forget that I am chronically ill.

Another thing that I've done to make my social media presence more healthy is to be careful with who I follow or the YouTubers I watch. I'm also careful with friend requests on Instagram. I try not have chronic illness accounts that are too OTT about their health, like recently I had one request and in their bio in bold capital letters they'd pot that they where 'seriously chronically ill' - as though they where they most chronically ill person ever and some of their posts where pretty unhelpful and wanting sympathy for their struggles with their health. Again this is something I don't partake in. I also I would say on YouTube I probably do watch more content creators that do have disabilities as I find I can relate to their videos, but I try to not watch too many health relate videos and follow say crafting or makeup artist YouTubers. I have enough of my own disabilities in my own life to deal with let alone filling my life with more disability content. In terms of Instagram I try to follow fewer accounts by those with disabilities but those I do follow I try to follow those that have a disability/not related to disability posting balance and I try to balance this out like I do with YouTube on accounts that are about other things I like such as crafting, hand lettering, letter writing, envelope art, make up etc.

It's all about getting the balance right and releasing and seeing to all ten portions of who I am. I won't deny that the disability portion is't there as it is, loud and clear, but it's not the only portion in my life.