Why I'm not a warrior, fighter or superhero...

NOTE: I just want to say before I continue with this post. I'm not against the terms and people referring to themselves as 'chronic illness warriors' or their 'fight' with whatever illness they have and other such language, it's just that this language doesn't sit with me.

You'll often hear of of people with illnesses referred to themselves as 'fighters!' or 'warriors!'. Even when someone has something like a simple cold may say 'I'm fighting a cold!'. This all makes it sound like we're in a war zone with our bodies and it's as if sheer willpower will get you through the day.

I'm chronically ill but I don't think that makes me a 'warrior' or 'inspirational' for living despite this. I'm just Naomi and I so happen to be disabled and living with a set of chronic illness and symptoms. Yes life on a day-to-day basis is a struggle and sure it takes a lot of effort to do everyday tasks and I require help with things. Then on my bad days when I can't get out of bed it's not because I've not tried hard enough or 'lost the battle' to get out of bed. I'm just simply not well enough to get out bed.

When it comes to chronic illness there isn't an 'after' or 'when I'm well again'. It's a journey of grief, acceptance and coming to terms with for the life I have now and learning to go with the ups and downs of good days and bad days and in-between days. I am now trying to let go of the life I did have planned out for me especially when it comes to my education and the career I'd always wanted (and I still hold out on the hope that one day I can return to that). Some days the grief for that lost life I planned is still very raw.

When I first got ill ill I did feel like I was fighting against my symptoms which at the time where 'medically unexplained'; hoping they would just be something temporary, but then over time I had to accept that this wasn't going to be something that was temporary. That mainly kicked in when I got my M.E diagnosis. When I got that particular diagnosis it was like a weight had been lifted over what I had been wondering what was wrong with me (I also had my FND diagnosis but that's a different story). After my M.E diagnosis I wasn't really told anything about M.E so I had to go home and research things myself* and that made it sink in that my health problems where there for good but also that it wasn't anything that I was doing wrong to make my body feel the way it did and that there was nothing to fight against. When I was fighting against my body I was just stressing it further and probably making myself more ill in the process.

Accepting my disabilities has been hard and it took a while for me to refer to and see myself as 'disabled' and many times I haven't wanted to accept the fact that I will be ill for the rest of my life to one degree or another and sometimes I find myself hating my illnesses or hating the fact that I live in a broken body that can't be fixed.

Two things really helped me with this. The first being YouTube; watching YouTubers like Jessica Kellgren-Fozard, Georgina's Journey, Hannah Hodgeson, When Tania Talks and Bex's Life to name a few and connecting with others with the same disabilities as mine online, some of whom I've become pen pals with*.

Of course it was and still is really difficult especially when I still feel so young to be dealing with being chronically ill and seeing my life and future bing turned upside down but something that I never planned for or chose. It's especially hard seeing people around me my own age like my brother doing many of the things I planned and want to be doing and achieving. This is where Ive fond it helpful to find people around my own age to talk to about being young and disabled in a healthy and supportive way.

Going back to the subject of this post to me the word 'fighting' sounds exhausting. Sometimes you just want to take off your armour and talk about how hard it is and how it sucks to be chronically ill. When this happens I don't want to be told that I'm inspirational and to 'just keep fighting/going!' or to 'battle on!'. I just want someone to listen to me and for me this where I've found therapy or talking to friends with disabilities helps. My friend Ruth has this quote: "just keep swimming and when you can't swim just float" and sometimes I just want or need to float for a while.

It's also been important for me to not to make my illness my identity; it's important to separate my health from who I actually am. When I first became unwell yes it did feel like it was all I had in my life; being disabled often feels like I full time job. Yes I am limited and defined by my health, but it's not the sum total of who I am. My health is part of me, (some of it's even in my genes) but there are so many other aspects of who I am that aren't to do with being ill. I find it so sad on social media when I see people so consumed by their illness and it seemingly to be the only thing they have going for them. 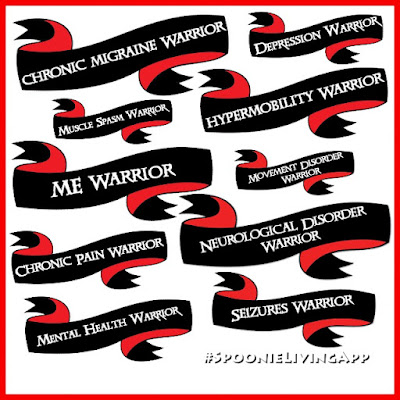 I'm not totally against the use of terms like 'warrior' and 'fighter' and I will use them in my hashtags on social media. I like how these terms unite those living with chronic health problems - like for example how I'm part of the Chronic Warrior Collective and writing for The Mighty.

Living with a chronic illness (or several) isn't something I chose so it doesn't inherently make me brave or inspirational. I don't need to be clapped for every little thing that I do. I am just living a life that just so happens to involve the fact that my body doesn't work in the way that it should and won't ever be completely mended.

For me giving up the fight helped me accept that I was chronically ill as opposed to chasing after trying to fight a battle that I was never going to win and for my body to be fixed and healed and be whole once again. That's why I don't see myself as a 'fighter' or a 'warrior' but I'm not against those that choose to use those terms, it's just not for me.

➜ If you're newly diagnosed with an illness I'd recommend you turn to reputable sources of information like charities dedicated to your illness. You could ask the clinician who has diagnosed you for some information that you can read or ask them for any particularly relevant websites you can read about your new diagnosis. I've recently written a blog post 'My advice to someone newly diagnosed' which you may find helpful.

➜ Connecting with others online is great but I've learnt over time that this has to be done carefully and you need to find the 'right' people for you. Personally I prefer and get on better with those that don't solely fixate on their health but more see it as part of their life but have other things in their life too. I find that this is more healthily. My advice with online support groups is to find the the right groups for you if you do want to join them as they're not for everyone. At first I did find a great online group but it's not as active anymore. The main problem I've found with only support groups is that there can be some negativity which is counterproductive to the group being their for "support".