Basically as the name suggests FND is a neurological disorder whereby there is a malfunction in the nervous system and how the brain and body sends and receives messages.

One way of thinking about FND is to look at it as a bit like a software problem on a computer. The hardware is not damaged but their is a software is and so the computer does not work as it should.

The symptoms of FND widely vary including physical, sensory and cognitive symptoms and they affect each person differently.
Some people may just have non-epileptic seizures or NEAD (Non-Epileptic Attack Disorder) or have movement difficulties (Functional Movement Disorder) whereas others may have a number of different symptoms.
This is only a very shortened list of the many different symptoms a person my experience.

Each person's case presents uniquely and no two cases are the same.

Symptoms often fluctuate and may vary from day to day or be present all the time. Some patients with FND may experience substantial or even complete remission followed by sudden relapses of symptoms. 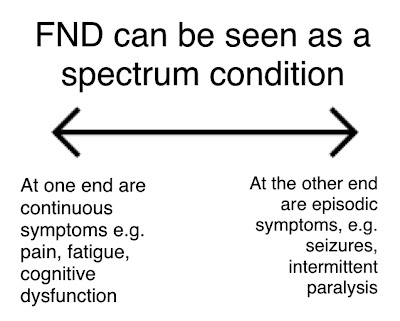 FND is diagnosed upon the basis of positive physical symptoms carried out usually by a neurologist.

Some of the diagnostic tools include:

The cause of FND is unknown, but ongoing research is starting to suggest that some predisposing factors can make a person more susceptible to developing FND. These things include having a pre-existing neurological condition, experiencing chronic pain, fatigue or stress, however this isn't the case for all people.

At present studies of FND have shown that triggering factors such as a physical injury, infection, panic attacks and migraines can trigger the first onset of FND symptoms, but normally these symptoms settle on their own, however, in FND these symptoms become 'stuck' within the nervous system, for example pain can be left 'switched on' in the brain for weeks, months and even years which result in a genuine and disabling problem in which the person cannot control.

In terms of looking at FND, conventional MRI show up as normal (unless there is another neurological disorder present), but with functional brain scans fMRI's in research they are beginning to show evidence of what is going wrong in the brain with FND. fMRI scans show changes in the person which look different to a normal person feigning their neurological symptoms*. These fMRI scans are helping researchers to better understand FND and are supporting what researchers, specialists in the field and patients already know - that FND is a genuine neurological disorder in with the functional of the brain is not working as it should and that the symptoms are out of the patient's control.