1. 'A Gil Behind Dark Glasses' by Jessica Taylor-Bearman

This is the first of two books by Jessica. In this book Jessica starts with a documentation of her life before she become unwell with M.E. (Myalgic Encephalomyelitis); then when she become ill and her rapid decline into very severe M.E. and the subsequent 4 years she spent in hospital due to the severity of her M.E.

The book took me on an emotional rollercoaster ranging from upset to anger. I'll admit that at the start of the book when Jessica is talking to her diary 'Bug' about the start of her M.E. I did cry because of the similarities in our story. Both Jessica and I became ill with M.E after having the flu from which neither of us recovered from and as Jessica talked to Bug about her overwhelming fatigue and leg pain (which I was struggling with at the time of listening) I cried and couldn't listen anymore.

I listened to parts of this book but I also read parts, some from the book other times on my kindle app. I have the sequel 'A Girl in One Room' which doesn't come in audio format but this year I'm determined to read the sequel.

2. 'The Language of Kindness' by Christie Watson

I've gotten through a lot of medical career books but this particular book was quite special compared to others. Christie doesn't write about the hilarity of the nursing profession but what is at the heart of nursing: kindness. I found this book really touching to listen to; to hear Christie talk about her career as a children's nurse, most of which was spent working in paediatric intensive care. In her book she talks about how she came to become a nurse and what it is to be a nurse. She shares her stories of all her and her colleagues acts of care kindness and what is at the heart of nursing and how this is being lost. It truly is a heartwarming book that I would highly recommend. 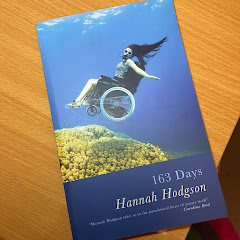 This book documents Hannah's longest hospital admission of 163 days. The book is split into three parts.

The first part is the book and I loved the unusual format. For each day of Hannah's admission there was a written piece alongside medical note documentation.

The next part of the book was a collection of Pallative 'After Care' poems and the third part of the book contained previously published poems and a written thanks. These poems I want to come back to when I feel I understand and can grasp the concept of poetry better, though I have read some of Hannah's other poetry pamphlets and have enjoyed what she writes and the topics Hannah writes about.

Laura Bates is one of my favourite authors and I love every one of her books and I've listened to a few of her books this year but I chose this book because it's slightly different to the usual feminism books.

I thoroughly enjoyed this book; it was like no medical career book I have ever come across nor did I realise that this field of work existed. Ben MacFarlane is a doctor and his job is to repatriate injured Brits from their holidays. I found it fascinating to and out the different injuries people have sustained on holiday and how Ben and sometimes a nurse from his team gets them home, hopefully without a hiccup on the journey, but that doesn't always happen, and sometimes he's called to help he own patient and and another flight passenger at once! As well as flying patients home on normal planes he also has flown patients home of medi-copters and luxury private jets.

It's defiantly a different book from your average GP working in an average GP practice writing about their day-to-day life as a doctor! Plus at the end of 2022 I discovered a sequal where Ben goes to sea to work on a cruise ship as a ship's doctor (which is also a good read).

6. 'In Your Defence': Stories of Life and Law by Sarah Langford

I actually listened to this audiobook twice last year. It's written by a defence barrister and she writes about her career climb from law school through to becoming a barrister which was quite interesting to understand that. Each chapter follows a different case in which she has defended. I liked how varied each case was in terms of the crime or crimes that the accused was on trial for. The author explained the different laws really well so that they where included in the book but where understood well by the reader.

It was an interesting and well written book letting you into the life of a defence barrister; how their job works. The author Sarah Langford writes about UK law and a look into different UK law courts and how they are run. She also writes about what it is like to defend those accused sometimes repeatedly of different crimes and the circumstances surrounding them.

I enjoy books that follow different people with different careers (as you can probably tell from this list) so this is a good book if you're interested in reading about law or the life of someone who works in this field. 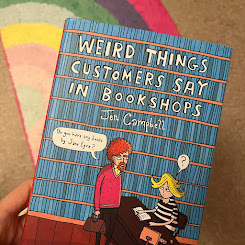 I got this book for Christmas last year. It's split into three parts the first two parts are stories from two bookstores and the third part is stories from different bookstores from all over the world.

The book contains little real life stories of strange things people have said in bookstores along with some illustrations to accompany some stories.

Some of the things customers have said to staff are so out there it's hard to believe what has been said is true. For example "is this book edible?" or "do you have a book on how to breath underwater?" or when a bookstore owner asks a customer if they can help them at at to which their response was "no I don't think you're qualified, I need a psychiatrist, that's the only help I need"

It's took me a while to get into this book and work out the plot but once I got into the book I really enjoyed it. I'm still trying to work out though what the title of the book has to do with the plot of the book however?

9. 'A Perfect Stranger' by Shalini Boland

This was another book that was different for me but it was a real plot twister - a crime thriller/suspense novel (that makes me want to read/listen to more of this genre). I really enjoyed listening to something different and also not knowing where the story was going and the plot twist at the end was excellent!

If you want a book that's a thriller and something that you're totally not going to expect then I'd highly recommend this book.

10. 'In Order To Live': A North Korea Girl's Journey to Freedom by Yeonmi Park

This book was quite different to what I normally go for but it was very insightful. I learnt a lot about life for North Korean people and the political set up there. Yeonmi Park writes about her life in North Korea and her family's escape, and how difficult it actually is to escape and gravelly from country to country before they can get somewhere in which they can claim political asylum. Then once they have finally claimed asylum in South Korea their adjustment to finally being in a place where they are free. It's an insightful book and if you're looking for something different or want to understand more about North Korea I would recommend this book.