Yesterday I had a VERY prolonged seizure lasting almost 3 hours. Dad doesn't like to call out the paramedics due to lack of understating of my illnesses and poor care experiences in the past. He managed to get some medication in me but hopefully once we have the oral diazepam and buccal midazolam prescribed it will make situations like this much better. I'm seeing my GP in the 15th August and I'm going with my nurse for support so hopefully with my Professor's letter and care plan in hand my GP will comply but I've been having some issues from him so we shall see; if he doesn't comply we'll take it from there and hopefully once the Complex Care Team get involved that will hopefully help the situation too. I'm also going to show my Wellbeing Workers from the Wellbeing service the letters my Professor has sent me this week as they've been doing some care co-ordication too.


All night I kept waking up in severe joint pain and ended up using my oramorph and I struggled to get comfortable. I had a lay in and got up and as a distraction I started creating a reply to a letter for one of my pen pals Ella and got myself dressed and some breakfast. I then watched some TV for a bit until lunchtime. I was still struggling with pain so I decided to do a sticker by numbers picture which was quite fiddly and difficult to do as I was having spasms in my hands and I was also struggling with concentration and it was a bit brain fogging but I felt a sense of accomplishment when I finished it, especially because of how much ore effort it took up to do on a day life today. After that I just laid on the sofa and watched TV. I've now had my tea with Dad and I'm just letting my tea settle. I'm hoping to have enough energy later to wash my hair, even if it's just a shampoo and they spraying in some leave-in conditioner. 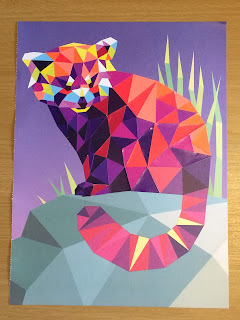 When I have seizures it has a knock-on effect with my health, even just one seizure, let alone several hours of seizures. Because of my hypermobility the force of the seizures causes my joints to sublux/dislocate and my muscles spasm causing an immense amount of pain; pain which carries on sometimes for days, hence why I've been in a lot of pain today. Seizures are also very tiring so I sleep a lot and need to lay and rest and it stirs up post-exertion malaise. My brain is also very foggy from the pain and tiredness so I get more forgetful and find it hard to concentrate and tasks take a lot longer to do. I'm also more hypersensitive so my tinted glasses help and I turn the TV volume down or just enjoy the quiet. I'll still be feeling the effects for the next few days.