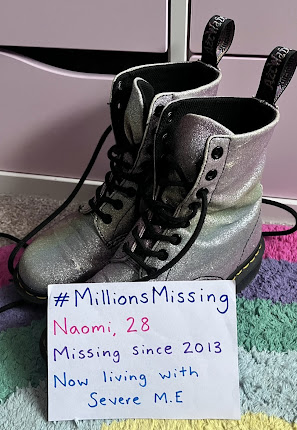 The 12th May marked M.E Awareness Day. I have been missing since 2013; the life I had planned out for me back in 2012 is now just something I dreamt up. I can't think about the past of the future, I must focus on the hear and now; getting from one hour to the next and at the end of the day it's exhausting to know that I will have to repeat all my daily struggles once again.

I started to become unwell in 2013 - that's sort of when my initial symptoms became progressively worse but becoming unwell was something gradual and I just thought it was because I was overworked at Uni and in February was when I had to leave Uni.

Over time my health worsened; I kept going to my GP and was repeatedly told that I had Post-Viral Fatigue Syndrome and my symptoms would ease. But they never did and my symptoms slowly worsened.

Fast forward to the 4th July 2017. I had my first appointment with my FND neurologist and in that appointment my diagnosis of FND was confirmed though some of my symptoms didn't fit with FND and so I was also told that I had M.E. Before the I hadn't heard of M.E and there was no further forwarding referral to an M.E service so I was left to go home, research M.E and find out how to live with it.

I'd say back then my M.E would have been classed as 'moderate' on the M.E Disability Rating Scale but now my M.E has been classed as 'severe' but personally I feel that whether your M.E is mild or severe it is still a difficult illness to manage not just practically but in terms of how poorly understood and under funded and researched the condition is. 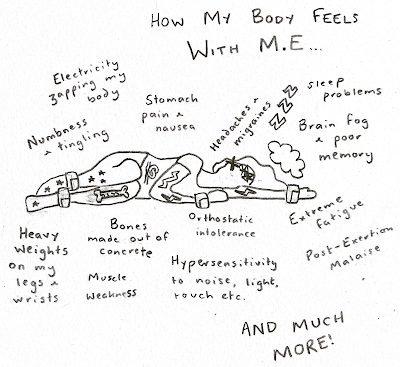 Since 2013 I have been missing from education, meeting friends, going to social events, going on holiday, employment, voluntary work, on my bad days even leaving my bed and more. M.E has left me feeling invisible to the world and I only really see the same few faces.

M.E has left me dealing with a myriad of different symptoms affecting my whole body including immune system - it is much much more than 'simply feeling tired'.

I feel some days as though M.E has taken over and I'm not me anymore; I am M.E.

I try to be positive as the alternative is to be miserable and I'm not one of those 'woe is me' kinda people. When I first became unwell I did feel like being ill was all I had in my life but when I had some sessions with a health psychologist I started to see the other parts of me. I still have to work within the restrictions of my M.E and make adjustments when it gets worse as it has done lately (hence my lack of blogging as well as just sharing videos on my YouTube channel when my health allows) but it's all about balance as currently there is no cure for M.E.

I'm not quite sure how to end this blog post. I've just been typing here and there as my body allows and ironically I seem to have finished this post on a Tuesday which was the day that I used to post on.

I think in this post I wanted to briefly share the timeline I've been on and also how invisible M.E makes me feel as well as being part of the millions of people missing due to M.E. I wish I could say that M.E is getting greater understanding and research but sadly that is not the case. Just know that if you also have M.E as invisible and missing as you may feel you are not as alone as you may feel you are.