Book review: 'Me Before You' by Jojo Moyes | *Spoiler alert* 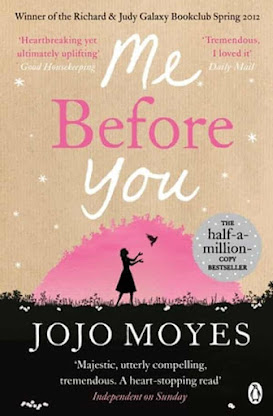 The plot of the story is basically Lou, a young woman in her 20's who is looking for a job after the café she worked at closed down. After many failed attempts at finding new employment Lou takes on a job caring for Will who became a quadriplegic after being hit by a motorcycle. Following his injury Will struggles to adapt to becoming a quadriplegic.

It's a romance novel, a genre I'd never read before. If I hadn't of heard Jojo Moyes sharing that it was a romance novel in an interview with her at the end of the audiobook I wouldn't have instantly put it down to be a romance novel. Saying that though there was an element of romance as Lou and Will over time grew feelings for each other as the story unfolded.

I think the author got it sort-of accurate on Lou's perspective as she get's used to caring for someone with a disability as someone new to this type of work. For example how at first Lou and Will struggle to connect with each other and Lou getting used to taking on a care work role such as managing Will's medications and the complexities of his health and how she feels unsure of what she is doing. Then on the flip side Will getting used to having Lou as his carer. I also feel that the author did her research on the affects of spinal cord injuries and also their care needs such as at one point in the book Will develops a fever and due to his injury he is unable to control his body temperature and required medical intervention.

I think the author got it accurate sort-of such as how at first getting used to having a new carer and also for Will how it feels for him needing someone to do so much for him and the loss felt when you become disabled which I could relate to. As well as this the emotional response people have towards their acquired disability. I think it was positive how Lou tried to show Will that there’s a life you can still live when you have a disability.

Despite Lou's best efforts to help Will see that he can have a life worth living despite his health problems Will remains deeply unhappy and wanted to end his life in Switzerland with the organisation Dignitas. I felt it was very brave of the author to bring into the story assisted dying and the mix of feelings and reactions from people Will, his family, Lou her sister and the quadriplegic message board.

All-in-all it was a good book and I would like to see the film version and also read the book sequel at some point but I don't feel in a rush to want to read it.