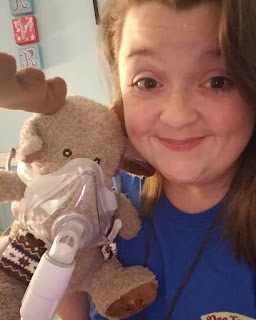 I have to admit I was a mixture of honored and shocked when I was asked to write a blog post about Mental Health Week. I'm no longer ashamed to admit that I have anxiety, depression, or PTSD. But generally when people reach out to me online, it's only ever to ask about my physical illnesses. I remember a time when I was scared to death to "catch" depression or for anyone to imply I had anxiety. This was also, notably, during the time I was a normal functioning person. The thought of serious illness scared me. But being labeled as mentally ill, scared me more because of the stigma behind it. In retrospect it was a stupid way to think. After all, mental illness can be treated and managed just as well as a physical illness. But, just like chronic illness, you don't "get it" until you get it.

If I'm honest, I've been struggling with anxiety and depression since 2015. That was the year when I became physically ill. It's a bit of a long story, but I will crop it to just the important parts. Because after all, the "serious illness" that I was so afraid of caused the even "scarier" mental illnesses I have now. I was in the middle of my 2nd year of college when my body just started malfunctioning. I was the healthiest mentally and physically I'd ever been. And then life just hit me with a mystery illness. Nobody could figure it out. Or I should say no one wanted to. Except for my lovely primary care doctor. She has fought for me every step of the way. Even in the newest journey with my mental health. But back to the story. My first ER visit during this time they unknowingly diagnosed me with anxiety. I went in nearly passing out and with a racing heart. But they decided anxiety was the answer because I was young and "active". They told me to take some medication and "chill out". I found out later when setting up a patient portal through the hospital, that "anxiety" was listed as one of my diagnosis'. I was livid. How dare they call me mentally ill? I was upset about it for a long time. And I guess rightfully so, because I didn't have anxiety at that time. But I went home that night sad and still sick. I had more ER trips after this that all were a waste of time.
But I needed help. I WAS sick. Despite the hospital not believing I was sick, my PCP sent me to a Cardiologist. He tested me, but found nothing wrong. So I was passed on to an Endocrinologist because of past hormone issues. The tests I did for him showed I was sick, but he tried to turn a blind eye. I called him on it, and he gave in and treated me. I shouldn't have fought so hard for his help, because he was the main reason I have PTSD. After a small misunderstanding on the phone, he verbally and nearly physically assaulted me in the exam room. One minute he was fine, the next, he was growling and yelling and balling up his fists like a fighter. I was horrified by the experience and ran out of the room crying. It's easy to say that we parted ways after that. I tried to push past that, but the incident still haunted me. Especially considering that he said every doctor would know how terrible I was and no one would want me. It scarred me, even to this day.

As I became more ill and added more doctors to my list, the worse things became. I was fearful (still am) of calling the nurses for help. I let myself be mistreated and walked on because I would rather stay silent than go through that whole scenario again. Despite all this, I put on a happy face like I was fine. But it all came to a head in 2017. The loss of a friendship brought every feeling I had kept inside tumbling out. I was deeply depressed, having dark serious thoughts, and crying every night until I couldn't breathe. I was so disgusted with myself. I felt so ugly and so alone. I had tried to hide the fact from myself that I was mentally ill. I didn't want to believe this could happen to me. But it did. My internet friends helped carry me through until I built up the strength to see my PCP again. She said it would be ok and I agreed to go on medication. I was never ashamed to take it, because I was already on tons of pills at that time. I was more ashamed of the diagnosis of mental illness. After some trial and error, I ended up on an anxiety medication that has truly saved my life. And now I'm seeing a therapist who has helped me start to heal. I've also replaced all my medical doctors with new supportive ones. And I can't tell you how much better I've become since that change. And if it matters, I WAS sick and now have tests to prove it. The diagnosis' are many, but it feels validating to know they're real.
Honestly my life has really changed a lot since owning up and accepting my mental illnesses for what they are. It wasn't easy to tell those I loved I needed help. But it turned out to be the best thing I could have done. And so I can only wish the same for anyone struggling or newly diagnosed.

It's ok to not be ok. But please don't wallow in your feelings every day. Get help. Talk to a friend.
Having a mental illness doesn't make you weak. It just means you have a confused brain that is missing some chemicals.
Mental illness will only ruin your life if you let it.

Now referencing the beginning of the post. When I got the original message, I suddenly snapped back into my old denial of my illness. I was hesitant to respond because the thought of displaying my mental health for everyone to see was scary and intimidating (thanks anxiety). But then I thought about it for a second and I realized I'm not ashamed of my diagnosis' anymore. And you shouldn't have to be either. Mental struggles are normal for everyone. Some just choose not to speak about it. Talking about mental health issues should be normal and encouraged. Yet somehow our society still struggles with this issue. I hope one day we do break the stigma. Because it's ok to not be ok. There is help. And you all are loved more than you know.