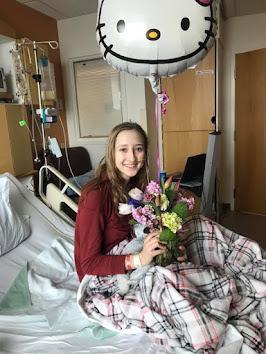 I just finished junior year of high school, and most would say I live a relatively “perfect” life as viewed from the outside. However, I struggle on a daily basis with several invisible illnesses. I have a disorder called Hypermobility Spectrum Disorder (HSD), which is a connective tissue disorder caused by defective collagen production. It’s very closely related with Ehlers-Danlos Syndrome, specifically the hypermobile type. This condition has been the root of my other conditions as well as issues that remain undiagnosed.

For me, HSD has caused: Dysautonomia (dysfunction of the autonomic nervous system causing heart problems, body temperature problems, blood pressure problems and more), Severe Pelvic Floor Dysfunction (the improper use of the Pelvic Floor Muscles), Gastrointestinal Dysmotility (the slowed movement of food and other materials through the GI tract), Vocal Cord Dysfunction and Asthma.

The hardest part of having HSD is often feeling overlooked, because you don’t have an EDS diagnosis and many clinicians aren’t aware of the spectrum of hypermobility. Personally, I experience symptoms everyday, most prevalently joint dislocations and Dysautonomia symptoms.

My medical conditions often dominate my life. My day is consumed by taking several medications and vitamin supplements as well as a rigorous eating and drinking schedule to try to increase my weight. I often have several appointments a week, usually for physical therapy.

Though all of this can be overwhelming, it’s taught me a lot. It’s taught me the value of a positive attitude, and most importantly it’s taught me to be grateful and cherish everything I have. Of course, sometimes it’s really hard. There’s been some really dark times during hospitalizations and tube feedings especially, but I made it through them. Now my goal is to slowly strengthen my joints and get myself back to living a normal life. In the meantime, I’m going to continue advocating for those with invisible illnesses and enjoying life as much as I can.