One Second Every Day - March: Week 4


Went out with my carer and managed to get my glasses fixed which I broke during a seizure. They're not perfect but they're do-able. We then had a drink in Costa and headed home.
I watched TV for a bit and then took a break to do some college work and then when back to watching TV and now I've just finished doing a bit more college work and now I'm going to start getting settled down for bed.


Popped out with my carer today to post some letter and drop in at the GP practise.
All afternoon I've been attempting to get some college work done but so far I haven't managed to get done what I want as my brain is so foggy and I'm struggling to focus. Even attempting to work in short bursts hasn't worked - my brain is just going in slow motion.


Had a nice quite comfy clothes day.
My POTS was playing up a bit today but I managed to get my target of two modules of work done. Some days I'm better at pacing than others.
Got quite a bit of mail today including some from pen pals, and some things for the Bravery Bottles project. I also wrote a coupe of bits of mail. I've gotten a bit behind but I've realised that I don't have to write a long letter, even if I just write a few letters it's the thought that counts and saying hello and that I'm thinking of you.
My step-mum bought me a new duvet as mine was in desperate need of throwing out and my new one is like a fluffy cloud. 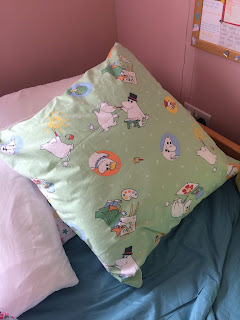 Struggled to get out of bed today.
The post has becoming earlier the normal so I came down to a stack of postcards from PostCrossing. I like the international stamps and I got a 'scratch and sniff' stamp from the USA.
My step-mum is kindly making me a cushion cover today for me using my Moomin's Doing Art fabric.
I'm having another comfy clothes day. It's nice having a break from appointments at the moment and just being able to chill out at home and spend the day at my own pace.


Had another quiet day in. Not been feel great today physically or emotionally. Still feeling flu-like, headachy, tired, run down etc.
Only managed to get one bit of work read but that's okay; I have plenty of time.
Spent the afternoon and evening on my bed watching TV. Got a bit bored of Bones so I thought I try and find an alternative to watch so I've started watching 'Agents of S.H.I.E.L.D'.


Went to a friend's baby shower for a little bit this afternoon. I was in two minds about going as I've been feeling anxious about going anywhere since my seizure at church which has totally knock my confidence.
When I got home I watched some TV and fell asleep on the sofa.
Didn't manage to get any work done, but i'm telling myself it's okay to have days off.
This evening Dad, my step-mum and I watched a film called 'The Dressmaker'.


Didn't feel confident enough to got to church again and my POTS was playing up again and I'm still feeling unwell so I've been curled up on the sofa watching TV.
Dad washed my hair for me and I spent the afternoon and evening on my bed.
The evening was finished off with Dad, my step-mum and I watching the final episode of Baptise.