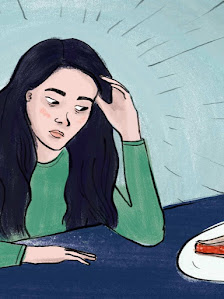 And so, it’s that time of year again. The time of year to ‘take stock’ and try to explain to the world why eating disorders are so dangerous, for another year to pass and for little to change. Little investment from the government into much needed mental health service provision, little movement from social media companies who promise us that they will remove harmful content and most of all the ‘too little too late’ for those who have lost their lives over the past 12 months, to a disease, a disorder all too often branded as ‘a lifestyle choice’.

We live in a world where the image of ‘beauty’ is plastered everywhere we look, from magazines and newspapers to television advertisements, companies that thrive and make millions from our constant insecurities, our desire to better ourselves, to ‘fit in’ a primal instinct which dates back to tribes from thousands of years ago. We like to be part of something, to belong. However, although I believe that media does play a part in eating disorders, I’m yet to believe they are the cause for the increasing number of lives lost each year to debilitating and deadly eating disorders.

I’m sure, if you have read this far, thank you. You may think to yourself, ‘Why can’t they just eat?’, whilst potentially thinking that the author of this post is typing this in single digit clothes. I can tell you, you are wrong. People with eating disorders come in all shapes and sizes, believe it or not, some of the sickest people are also those with a ‘normal BMI’- BMI means nothing, even the latest NICE guidelines for treatment of eating disorders stipulates this. Anyway, I will not dwell on BMI for now but will give you an insight to what it’s like to live, day in, day out with an eating disorder.

Some people in this world fear spiders, others fear snakes, or rats or heights and therefore do not trek up mountains or travel to parts of the world where they are likely to encounter these. They provoke a reaction; a surge of adrenaline, a rise in cortisol which makes your heart beat faster, giving you the surge of energy for our innate ‘fight or flight’ response. Now, lets change the fear, lets imagine that the spider was a sandwich, a slice of cake, a piece of fruit or a slice of cheese- foods that are near on impossible to avoid, coupled with the phobia of weight gain. Every waking hour, thinking about when your next encounter with food will be, how much it will be and what you’ll be faced with. It’s exhausting… really exhausting.

Then there’s the numbers… I mean, maths has never been my strong point, but my mental arithmetic has strengthened over the years, mainly due to the obsessional calorie counting. I could tell you the calories in most foods but it’s something I’m far from proud of - in fact it upsets me to think of all the time I have wasted learning these things and how I could have utilised it better; perhaps learning a new language or skill. Then there’s the scales; growing up, I don’t remember having weighing scales in our house and it was never something that particularly bothered me; I can’t say I cared about the size of my clothes, I enjoyed sweet things, lots of them… Nowadays, I rarely get through a day without staring at the number between my toes, sometimes 6,7,8 times a day. It distresses me, yes, but I have a compulsion that I need to know, that despite never being ‘happy’ with the number, it gives me some sense of security. If only I could utilise that time better too…

It takes up an awful lot of time having an eating disorder. It’s not some ‘fad diet’ or ‘a diet gone wrong’ its an obsession, a compulsion, a disease and no two people will endure the same experience. I am fully aware of the toll my eating disorder has taken on my body, I know the risks and I know what I need to do to overcome these but its much easier said than done. Much of this battle, I fight alone as I do not want to be seen as ‘seeking attention’ or ‘a failed anorexic’ hence why this post is anonymous. We all have our own demons in life and after over 10 years of suffering, I continue to work towards defeating mine. I am very grateful to the NHS and the support they have provided me with over the years, I have a very understanding GP and have accessed a variety of specialist eating disorders services, I count myself lucky. My journey has been anything but plain sailing and sometimes I think that my current weight influences how I am treated. As difficult as it is financially, I have made the decision to see a therapist privately - which doesn’t come cheap. I hope someday I can learn to trust her enough to let her inside my head.

So, glamour… some people think that the thinness that comes with some types of eating disorder is glamorous. I can tell you for sure it is wrong, and that societies perception of eating disorders as just those with a skeletal body image is also very wrong. The coping mechanisms for those suffering with an eating disorder vary, mine have changed a lot over the years but I have yet to find any of them glamorous, neither is the side effects of thinning bones, yellow teeth, dry skin, chapped lips, dehydration, cardiac arrythmias, acid reflux and crippling stomach pains to name a few. It’s not glamorous to cancel on your friends last minute because you are too anxious to join them for dinner, to have to know the menu a week in advance, to spend several hours a day in the bathroom, for endless amounts of mascara to be streaming down your face, heading back to the table acting as if nothing is wrong. I envy people who say they are happy with their bodies, I was hoping I would grow to fall in love with mine, but I am very sceptical. Imagine everyone around you telling you that you need to gain weight yet looking in the mirror to see nothing but jiggly bits and flaws that you are so desperate to lose. You lose trust in those around you because you feel like you are being lied to, you become manipulative and deceitful all to save yourself from having to take in those extra five calories…

It’s sad for me to think of all the years that have passed, the missed opportunities. I am now an adult, with a full-time job, who strives everyday to support others in their recovery, yet I have so far left to go in my own recovery journey. I am grateful to my illness in that it has made me a stronger person, given me the opportunity to meet some lovely people, and I am more insightful as a person. However, I regret that I can’t let other peoples love for me in, I can’t accept compliments and can’t seem to move forward as I continue to battle with myself. Someone once told me ‘ships in the harbour are safe, but that’s not what ships are built for’ and I hold onto that every day.

I strongly encourage anyone who may feel that they are suffering with an eating disorder or have a loved one who they are concerned about to contact the Beat helpline, seek support sooner rather than later as early intervention is key to recovery.

To contact BEAT for support click here to speak to someone either over the phone, online or face-to-face or to find services local to you.
To visit Beat's website for more information about their work or to understand more about eating disorders click here.