Doesn’t your mother feed you skinny?
Why open the door when you can just slip under it?
Do you even eat?

Skinny Sophie, it was who I was. All those things were said to me before I was 12. It didn’t bother me. I ate healthily and I was fine. I did a lot of gymnastics and cheerleading too and probably had a fast metabolism, or whatever it was people said.

As I hit puberty I stopped growing upwards, I was already about 5’8” people stopped commenting on how skinny I was. My mum kept telling me I was eating too much chocolate and sweets. One day I was feeling unwell and vomited. And from there that's where my eating disorder began.

I was chatting to some friends about something totally unrelated a few weeks later. I can’t remember what it was about but a friend said ‘I just don’t understand why people would put themselves through that?’ That stuck with me, why was I putting myself through this. I then started skipping lunch at school and instead I'd spend the school break and lunchtimes in the library doing homework. It wasn’t long until I started skipping breakfast too. Mornings were so manic before school that my mum never noticed.

But I wasn’t fine. I wasn’t fine at all. I'd also started self harming when I had eaten as ‘punishment.’ I didn’t think anyone had noticed because I was still eating some of my evening meal at home and the odd pice of fruit now and then. I hadn’t lost much weight, just hadn’t  gained any around puberty when all my friends had.

But people had noticed. My dad worked away but when he was home he’d often ask me on my way home from cheerleading training “is everything ok Soph?” I’d tell him I was fine just tired. A few of my teachers asked if everything was okay too. I told them I was fine just had a lot on what with my GCSE's in a few months.

One day my head of year pulled me out of a chemistry lesson for a chat. She was a lovely older woman nearing retirement, she brought me into her office “Sophie some of your friends are concerned about you.” I told her I was lucky and naturally skinny. She sent me to the school nurse who sent me (and both my parents) to the local Eating Disorder Services. I spun the ED services an elaborate story about a friends birthday cake which didn’t agree with me and make me sick and my friend happened to be in the loos at the same time. They was concerned that my weight was less than what the school nurse said so I told them that the nurse had weighed me with my school blazer on with the pockets full. I had everyone fooled. But I started to eat. My GCSE's went well. I was eating and thought I was better. When I started year 12 the ED thoughts came back. Stronger this time and the self harm was still ongoing. Worse even, I was hurting myself in the school break times between lessons. One day when I was going over a bad test result with my geography teacher at breaktime, she offered me a sweetie and I politely refused. She put her pen down and looked at me. “Sophie, are you eating?” I looked away “Soph?” The tears started and I tried my best to stem them and wipe them away but it didn’t work “Oh Sophie” she said; the bell went and she sent me to my bIology lesson saying she had to teach and would talk to me at lunchtime. She got me as I finished my pre-lunch lesson. And brought me down to her office, she was the head of year 13. She asked me what had been going on and I told her most of what had been going on in a very mixed up and muddled way. She asked me if my cuts needed medical attention then asked if she could take whatever it was I was using to hurt myself off me. I wouldn’t let her and she wasn’t about to search my massive rucksack.

She sent me to the school nurse who sent me back to the Eating Disorder Services. They gave me CBT for a few months but I still wasn’t eating. My clinician told me I’d have to go to day treatment and take some time off school. My parents weren’t happy with this idea at all and told me I wasn’t allowed they ‘didn’t believe in Eating Disorders’ but my clinician was telling me it was the only way I was going to get better. I was a mess, going from school to the Eating Disorder Clinic twice a week. My clinician rang me to tell me there would be a space for me in day treatment the following Monday.

I told my dad when we were in the car. When we got home he had barely got in the door when he started “No f***ing way Sophie, school is the most important thing.” He was shouting blocking the door. Telling my mum to come downstairs. He moved and I bolted out of the front door and just ran and ran and kept running. I found myself in a housing estate not far from ours with my phone in my hand and wearing just leggings, a T-shirt and light hoodie despite the fact it was about 9.30 pm in November and raining. I found myself at a friends. I rang the bell and her dad Alan answered. “Is Ellie In?” I asked breathlessly. He knew something was very wrong as why else would a 17 year old girl be knocking on the door in the rain on a Thursday night with tears streaming down her face. He ushered me in and gave me a towel to dry off. Ellie can downstairs with a pair of spare pyjamas. I was watching some shortly TV with Ellie - America’s Next Top Model or something. The doorbell rang. He told Ellie to close the door to the living room. It was my dad. He’d been out looking for me. I heard Alan and my dad yelling at each other. It was terrifying to hear two grown men yell like that. But I stayed at Ellie’s and my dad left. Her mum Sue came home about midnight. She was a teacher at a different school with mental health training we talked and she rang my parents and dropped me home about 3am. My dad was in bed but my mum was up. She gave me a hug, which she hadn’t done for at least five years. “I know I don’t say it, but I do love you Soph, you know that don’t you”; I nodded but what she said was true. She never told me she loved me. My dad and I often hugged and said we loved each other but mum never did.
When I woke for school the next morning my dad had already left but Jake told me “dads going to f***ing kill you tonight” but he didn’t after school dad just said to me “if you want to throw your life away with the crazies at the loony clinic then you can do that.”

So I started day treatment the next Monday. The morning was okay, all the ladies talked about how well they’d eaten over the weekend. Then it was lunch time the largest portion of stir fry that is ever seen was put in front of me. I ate about a third of it in an hour. The took the plate off me then told me “Sophie, you’re obviously not ready for treatment, we have to ask you to leave.”

I rang my mum telling her they’d kicked me out. She picked me up confused with tears running down my face.
I went into school and spoke to my teacher who advised me to take a week of school. So I did and did girlie things with my mum then went back. I was so behind in all my subjects I was in constant crisis. I was still really struggling with my eating. There were so many days that teachers would call my mum to pick me up because I was in such a state. It was obvious to everyone that I was a mess, but I didn’t care. I would come home from school everyday in tears and tell mum I was not going back, but I would the next day.

Then one day in February I came home and told my Mum I wasn’t going back like always “Okay!” She answered. “Your obviously not ok Soph, it’s not fair on school to have you there, to us to have to have you in this state when you get home and for you to force you.”
Since I was over 16 I didn’t have to be in school.
My mum rang the school and told them I wouldn’t be returning for a while. My dad was very angry but my mum told him “if you can be here every night at 4 when she gets home in tears, and pick her up when school ring me that she needs to come home then you can have an opinion".

Mum took me to a private councillor, not an eating disorders one just a general one and within a month I was eating 3 normal meals a day. Erasing the stress of school from my life made me into a different girl. I missed my friends and got bored but I was happy and getting healthier. I genuinely am not sure I’d be alive if I hadn’t taken time off school.

I returned to school the following September happier. It was very weird being in my brothers year but I quickly made new friends and would eat in the canteen with them.

Now I am a healthy weight and mentally fine.

I pity the scared little girl I was back then and I’m a totally different person now.

I know now that I will never go on a diet or skip meals because I don’t want to spiral into the dark place I was in ever again.
If you are worried about your eating please tell someone because believe me eating disorders are true tourture and I wouldn’t wish one on my worst enemy. If you are struggling know that I came out the other side and you can too. 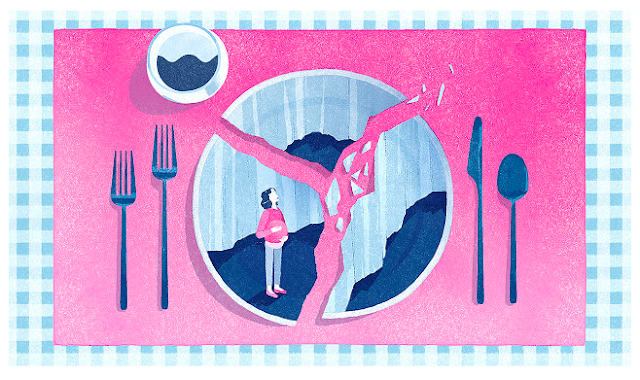 For help and support with Eating Disorders, whether you have and ED yourself, or you are affected by and ED because you are a carer, family member, friend or are a professional who works with people with ED visit Beat Eating Disorders. For Beat's support services whether it be via telephone, online chat or to find your nearest support service click here.