Loving My Body Despite Gastroparesis

“Let’s do a gastric emptying scan,” said the gastroenterologist. I was only thirteen at the time. We were on a frantic search to determine the malady at the root of my stomach woes. Relentless nausea, wretching, and the oh so unglamorous constipation—this was the umpteenth medical test, and every single one before had led to more questions than answers. I thought the idea of a gastric emptying scan to be kind of silly. What would eating radioactive eggs tell us? I can assure you I did not leave the hospital that day singing a peppy rendition of the Imagine Dragons hit titled Radioactive, but between dry heaves, I really did “feel it in my bones.”

Ironically, the gastric emptying scan I had deemed irrelevant was far from it. The results were indicative of a condition known as Gastroparesis. My stomach is partially paralyzed, digesting food and its natural acid secretions too slowly. What little I choked down basically sat there to rot.

Life changed after my diagnosis of Gastroparesis. Gazing into the mirror, I did not recognize the reflection staring back at me. It was as if I was seeing myself for the very first time. I could no longer maintain a convincing healthy façade. Foundation did not conceal the dark circles under my eyes from malnutrition. Stylish, baggy clothes did not hide my emaciated frame as I struggled to gain weight. Laparoscopic scars dotted my midsection, while feeding tubes were plastered to my face and abdomen.

Suddenly, all the changes occurring both inside and outside of my body finally had a name, as did each of my insecurities. I was vulnerable. Grabbing what little flesh I had, the nail marks embedded into my skin symbolized my contempt. I had a new relationship with this earthly vessel of mine, and it was not necessarily that of positivity.

Like most teenage girls, I hated my body. Still, the hatred I harbored was deeper than “does this outfit make my butt look big” or the anxiety over those extra cheese fries causing an unsightly breakout. Instead, it was fueled by the deep yearnings for a functioning body—one that could easily gain a few pounds to disguise my sickly appearance or one that was able to digest a plate full of ooey gooey delicacies. However, I had Gastroparesis. That was never going to be me.

Learning to accept my body in the stages of awkward adolescence was an arduous process. I went through periods of resenting my peers. I was envious of the bodies they had, which digest food properly and lack painful medical devices. In a way, I was jealous of their ignorance. Many had the audacity to remark, “I wish I had what you had so I could lose weight,” completely forgetting that their muscular build and the ability to shovel snacks in their mouth without hesitation would be things of the past if they had Gastroparesis too.

As I approached young adulthood, I had to alter my perspective. Wallowing in the hypothetical out of order sign on my gastrointestinal tract would not bring me satisfaction. I later realized that I have to focus on what I can do rather than what I cannot do. 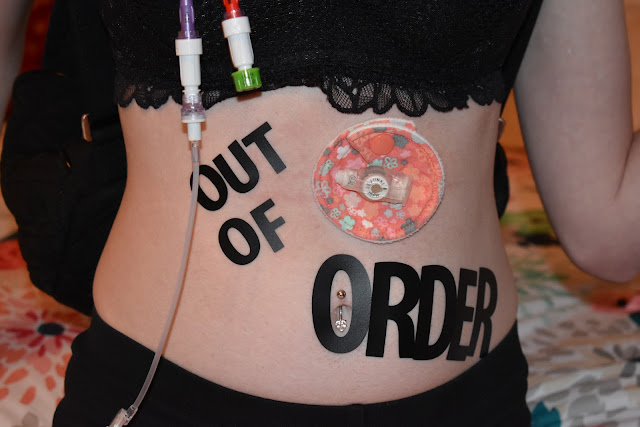