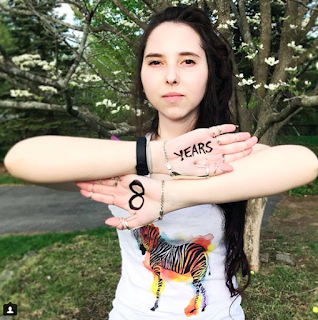 Hello, my name is Christina. I'm 22 and i’m an artist, YouTube vlogger, writer, lover of theater, and I also happen to have a chronic illness.

My sister and I were both born with the mutation for Ehlers Danlos Syndrome. My sister was lucky (thank God) to escape a lot of the complexities that I have unfortunately had to deal with, but EDS is something that really impacts both of us in everything we do.

8 years. Thats how long it took from the day I started searching for answers to the day I received my diagnosis.


8 years of medications I never needed, unnecessary tests that left me permanently scarred, and 8 years of the never ending guilt that maybe it WAS all in my head. A big part of my life was stolen from me when I was just 9 years old.

Now, Ehlers Danlos Syndrome is rare, or at least that’s what they say. If you ask me, its really just rarely properly diagnosed, which really isn’t surprising considering how little funding we receive and how little awareness there is among medical professionals.

May is Ehlers Danlos Awareness month and every year I try to make it my goal to spread the word.  I have realized that the best way to educate doctors is to educate their patients; Its unfortunate, but its true.  Some doctors you can talk at until you are blue in the face, or give them a pile of pamphlets that reach the sky, but it will go right over their heads. But by empowering other people to take charge of their health, we can demand understanding. It is no longer acceptable for them to remain ignorant. 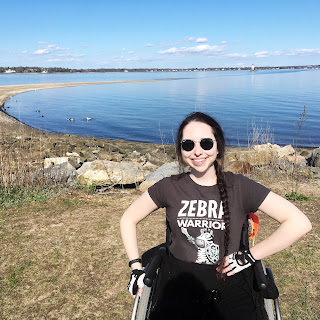 Another plus that comes from educating patients is that they will then turn around and do the same. This community of people online that I have stumbled into has been one of the greatest communities of people I have ever known. Encouragement and knowledge is shared freely and everyone is so eager to help one another, even in times when they have so little to give.  But the best thing that I think we can share is HOPE. When most of us were given our diagnosis we were not given a lot of hope along with it.  We are told “There is no cure and you will likely be “confined” to a chair by adulthood,” and then we are sent on our merry ways.  Although there may not be a cure, there are so many treatments available and ways to improve our qualities of life.

How many more lives need to be stolen away in doctors offices looking for answers? Early diagnosis needs to be the future.

My miracle has been manual physical therapy, which I cannot rave about enough. It has been life changing!


So if you take anything away from this post, I hope that it is “There is hope out there, don’t ever forget that!  Reach out for support wherever you can and don’t give up on your quest for answers.  And when you do find them, turn around and pass them right back around. You never know who’s life you may change.”


For EDS/HSD Awareness Month Christina has produced a series of videos and documents her life with EDS through her You Tube channel which can be found here.