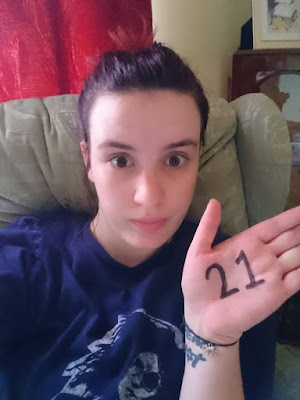 I got my Elhers-Danlos Syndrome (EDS) diagnosis aged 21 after years of questions and being told I was making things up. I always had problems with my joints right from being a little kid, I was in minor injuries and A&E more times than I can remember with joint injures (we know now they were dislocations and subluxations) to the point where even my parents thought I was faking it. I continued to lead a fairly active life despite the pain I was in, I suppose I was used to it. I went horse riding regularly, did well in my GCSE exams and completed my bronze and silver Duke of Edinburgh's Awards, despite injuries.

Until April 2012 where everything changed. I had a horse riding accident in which I damaged my back and neck, it left me a wheelchair user for some time. I did regain my walking for a few months, but by the October I was using the wheelchair again. I was diagnosed with Myalgic Encephalomyelitis, sometimes incorrectly confused with Chronic Fatigue Syndrome. I was bedbound for months and my muscles got weaker. My joints started dislocating more and more, and I didn't know why. I went to the doctors, he had no idea what to do so just gave me painkillers. Eventually, in 2015, a different doctor referred me to a physio who was astonished at how lax and unstable my joints were. She taught me how to relocate my joints (turns out I had been doing so all along) and she mentioned Ehlers-Danlos Syndrome, and so I went back to the doctors and asked to be referred to a rheumatologist. I saw the Rheumatologist in 2016 and he diagnosed me with Ehlers-Danlos Syndrome Type 3, which is hypermobility type. Since then I've had comorbid conditions diagnosed; Postural Tachycardia Syndrome, Gastroparesis, Craniocervical Instability and many more.

I fight EDS and every day, along with M.E. and my other conditions, doing what I can just to survive the day. I know several people who have died from the same conditions as me, and some of these illnesses can be progressive too. I am a zebra warrior, my scars are my stripes!