My eating disorder was never about my weight until it became that. I struggled with mental health issues since the tender age of 10, calling Childline because I wanted to run in front of traffic because I couldn’t shake the sad feeling in my chest, couldn’t laugh and pretend like other kids, and was kept awake by nightmares to the point I wouldn’t want to sleep. I had been bullied about my weight, because comfort eating was one reliable satisfaction I had, but that didn’t pop into my mind until long after. No, I slowly ate less and less because I wanted to vanish. I wanted to increase the chance of my suicide attempts working, I wanted to take up less space in the world, and I felt undeserving of feeling anything but unwell.

But eating disorders are insidious. I counted calories to make sure I was under the minimum amount, and had taken to walking to escape a rough home environment. When I realised I would decay faster by exercising more, my walks became mixed with running, and the calories I deemed as necessary lessened. Someone told me that they were glad I had lost some weight, and I felt pride. For the first time in months, if not years, I felt some form of satisfaction in life. I went from being an overweight teenager wearing mid-sized adult clothing to fitting into my 11 year old sister’s clothing. I didn’t have a goal weight. I didn’t have a figure I wanted to be. I found solace in the fact that my weight loss was predictable; I could reasonably predict weight loss based on my calorie intake and expenditure. Eventually, enough was enough, and I was put on bed rest at home, with a stern warning that more weight loss would mean hospitalisation. I didn’t care. I set my alarm for 2am, when my family, exhausted from fights over supplement drinks and what constituted a serving of protein, were fast asleep, and I would go into the cold with inadequate clothing and walk until the anxiety over my self-perceived laziness ebbed. Later, my mother found out and confronted me. She also accused me of binging and purging, and my pride at so far abstaining from purging got the better of me. After breaking several items in my bedroom and stormed out of the house, and purged the meagre lunch from my meal plan in a park bush. My already weak body felt ready to give in, but that unyielding voice in my head had won yet again, and my anxiety was gone.

And so the eating disorder got me. My PTSD and general anxiety was gone. I had found a use for the way my brain like to look for number patterns and do calculations, a trait I had always thought made me seem like a freak before. I enjoyed the way I could trace my body with my fingers and know how far each bone jutted out. Suddenly, the thought of gaining weight terrified me. I had lost any aspirations, I had neglected to maintain any friendships, there was just a puppet master in my head compelling me to stand guard in the kitchen, least anyone use more than a teaspoon of oil to cook with, or add sugar instead of sweetener in my tea. It was the same voice that broke down at an aunt for buttering a breadroll at a farewell barbeque, and was pleased when my sister passed me her hand-me-downs despite being seven years younger.

Of course, I had to gain weight. The truth was that it was that, or death. After months of threatening and bargaining with my care team, I conceded defeat. My competitive nature decided that if I could not be the person people knew for being ill, I would become the person who was known for her Truly Miraculous Recovery. Medically, this is incredibly dangerous, and mentally it was no different. I was constantly torn between the eating disorder and my will to beat it, but neither voice not quite loud enough to mask the fact that I was fully unprepared for either death with the disorder or life beyond recovery. I could not be compassionate with myself or let myself acknowledge out loud how badly I both wanted to live and die, to starve and stuff myself.

These are not opposing actions, either. My attempts at running full speed into recovery led to a seven-year struggle with bulimia. Four years of saving have barely touched the surface of my binge food depth. My teeth are full of fillings. I still struggle to eat anything “nice” without wanting to eat twenty and run to the toilet, or exercise until I’ve used as many calories as I’ve consumed, but there have been weeks and even months where I’ve been able to breathe freely.

I have been weight restored and have had good blood test results for over a year now, ten years after this all started. Recently, I’ve started being unfamiliar with this new body of mine, angry with the way my figure has filled out, and ashamed at how different I am to the frail version of me that still lingers in my head. I cry over lunch more times than I want to admit. But I am still here, fighting, with bags under my eyes and a voice that shakes more than it speaks, but fighting nonetheless. 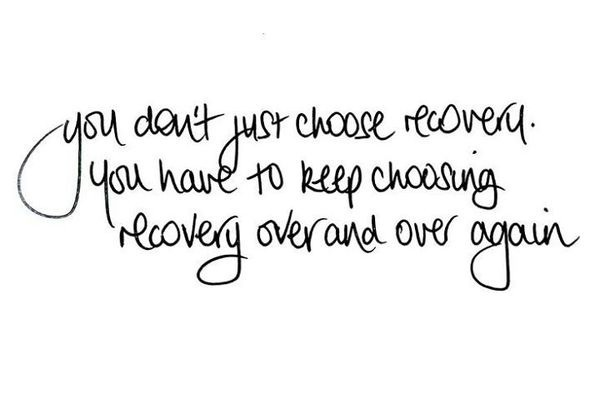 (* Jana is a pseudonym, the writer of this post wished to remain anonymous)