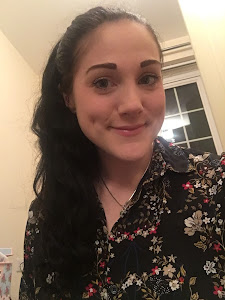 This Eating Disorder Awareness Week I really want to focus on something that’s helped me with recovery. For many years I’ve posted from my hospital room, yet today I’m writing from my bedroom.

Recovery use to be something that applied to other people. I’d hear girls in hospital discuss what they missed from life before their illness and how thinking of their old lives motivated them with recovery. I’d be encouraged me to think of the life I had before, to think about the ‘old Emma’. I’d smile but the reality was I couldn’t remember who I was before I got ill, even if I could it wouldn’t be a life to return to, I was only 9.

I started to think I would be ill for life. Instead of aiming for recovery I just aimed to stay out of hospital. I resented hospital, I’d be held against my will not able to leave till my weight increased enough to tip me out of the critical stage. 10 years into my illness aged 19 I decided I wanted to volunteer in Africa. I think everyone realised that 3 months in Africa, alone, with no one there to make me eat was going to end in disaster. I wouldn’t listen to those begging me not to go though and 8 weeks in I woke up unable to move. I was taken to hospital where I was admitted straight to intensive care. My potassium had dropped so low my muscles were not working properly, i was paralysed as a result and with the heart being a muscle it was at risk of too becoming paralysed. I was in a third world country terrified I was about to die. I was too ill to fly home so had to be stabilised out in Ghana. Unlike in the UK (where you can’t discuss religion as a nurse) the staff there were coming in telling me I needed God and praying for me. I was an athiest and had I been able to move I'm sure I'd have walked out the hospital. After being ill for ten years hearing people say that God could save me just made me angry. I felt like screaming, I'd been ill for 10 years if God could save then why hadn’t he? Why had he made me ill in the first place? I'd come from England to a third world country. In England I’d rarely hear anyone talk about God, yet in Ghana they’d start preaching in the streets, stand up on buses and passionately preach from the bible. I'd not have said but so many times i thought that the fact they were so religious and had nothing was just proof that God wasn’t real as if God was real they’d have everything and it would be me in the third world country. I just didn't get how people who had so little could be so happy and hopeful. Despite me thinking they were all crazy for believing in a God they couldn’t see I was always polite, because I did love the Ghanain people, and after all it was their country not mine. I didn’t know how to recover, but I knew it wasn’t God.

Back in the UK the hospital said it was a miracle I’d survived. They didn’t mean this in a biblical sense, just in the sense medically it was near impossible.

To me faith or prayer wasn’t something I had ever thought could help me recover from mental illness. In fact I thought people who prayed were mentally ill, in my head it was no different from hearing voices or hallucinating. Now though I feel very different.

I’m not going to use Eating Disorder Awareness Week to push my faith onto others, as I know if I had read a post like that before becoming a Christian I would have rolled my eyes thinking ‘oh gosh another bible basher’. I’m not exactly sure when I came to find my faith, BUT I do know for me it was something that has helped me recover. So I do want to share how with MY recovery my faith has helped!

I’m not sure it was ever a light bulb moment, instead more like little steps along the way. My sister started attending church with a school friend first and I was angry. I was annoyed she was saying there was a God when I was going through a illness I wouldn’t wish on anyone.

I first started unknowingly listening to Christian music. My sister would play Philippa Hanna and I fell in love with her music, feeling I could relate to the lyrics. She sung about accepting yourself and I found it uplifting. My sister told me she was from Sheffield and she was singing live the following month so I decided to go. I thought Christian music consisted of hymns. So when we arrived to see her and she started to speak about what led her to write Christian music I was in shock that all this time it was Christian music that had been helping me overcome my body issues. She spoke about how she too struggled with depression and by the end of the evening I felt uplifted a girl who had been so troubled had become a confident woman. The atmosphere was different, I was in a room of women building each other up, not knocking each other down. Church became a safe place I didn’t feel judged, but I went because i liked the community, not because I believed in God. Church became a place of positivity and acceptance. I didn’t pray though, because if God was real, he’d make a world without illness. I just didn’t understand why bad things happened if there was a God. So although the church friends had become a part of my life, and helped me, i didn’t have the same hope or contment that they did. But I was finally able to be part of a community. They accepted me. Growing up with Anorexia it became my identity and it made me feel safe. I was scared to leave Anorexia as the it was what I knew. I would use websites and talk to others as I felt that only other sufferers would understand. Church changed that though. Unlike a lot of situations people didn’t seem to have a label placed on them based on their appearance. In society I often felt my place was amongst others with Anorexia. At school you’d see ‘rich kids’, ‘poor kids’, ‘geeks’, ‘chavs’. I was in the mentally ill group.

Recovery isn’t easy. Over the years I’ve met more girls who’ve died from their illness than I have recover. BUT now I am in recovery. I look back and for me the change came from finding God. Everyone needs hope and for me i got that from God. I know many who don’t have a faith and recover, but for me it was finding God which helped me find hope. Knowing that I am loved by God, that my weight and shape doesn’t define me. That I am not alone. I’ve got a church behind me supporting me too. A local church runs a programme to help girls affected by mental illness. I’ve had true love and care and i’m learning to love and care for myself too.

I could have spoken about a number of things this week to raise awareness. However, prior to finding God i felt that people who believed must have perfect lives and had no idea of the problems I was struggling with. I felt my problems were proof God didn’t exist. I wish I’d have known that Church was a place where i could be supported and that God could help me. I now know why the Ghanaians I met were so happy; because they knew God. They had hope. SO many times I’ve been told I could die, on numerous times my family have had to travel to my bedside as I wasn’t expected to make it through the night. Doctors couldn’t medically explain it, the only answer is that it’s a miracle. I didn’t think someone who’d grown up in mental health units could ever feel accepted in church, but I do! I’d always clung to the odd unhelpful comments, those which are of an extremist background. I’d dismiss those who offered care, but now i don't  and that has truly helped me remain hopeful and in recovery.

I still have things which I can't understand and my never understand. Jus like in the medical world though, sometimes no one can explain why bad things happen. If a doctor couldn't;t explain your pain, yet could offer you a painkiller to stop it, would you say no and continue to live in pain? Because that's the choiceI had. I still don't know why bad things happen in the world, yet I know the solution is GOD!